Jolly Rancher Vodka Tutorial
It’s time again for childhood and adulthood to collide in a most delicious way! You can infuse vodka with Jolly Rancher candies, much the same way we make Skittles Vodka. Actually, this process is much easier, and the results are fabulous: tasty and gorgeous to look at. You can whip up batches of five Jolly Ranchers Vodka flavors in only twelve to fourteen hours with minimal labor on your part, so they make wonderful, affordable, memorable gifts, too. 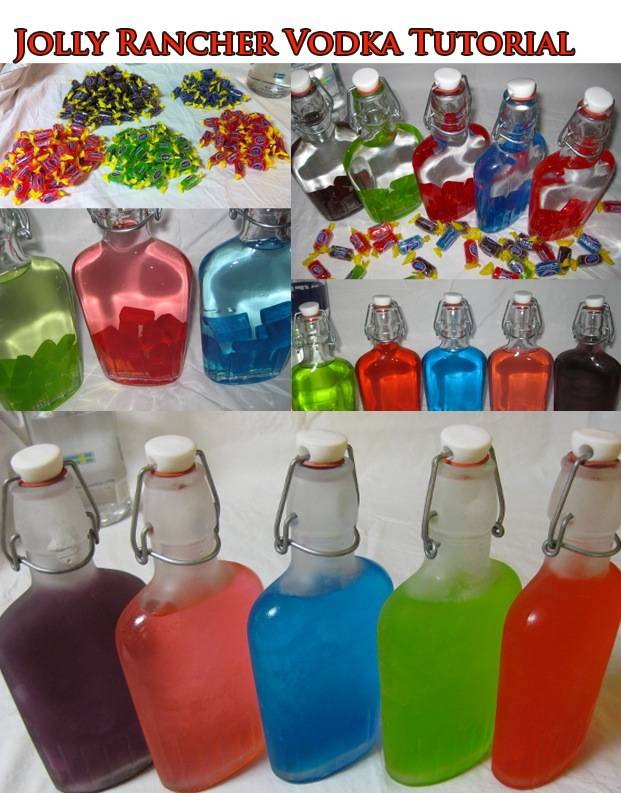 The Materials:
I bought more than I actually needed: a 1.75 liter bottle of vodka and a 3.75 pound bag of Jolly Ranchers

. With this, I could easily have made two batches (that is, two flasks in each Jolly Ranchers flavor) and still have had a bit left.

Here’s what you actually need:

A regular 750 milliliter bottle of vodka. A liter of vodka. You may have to buy a 1.75 liter bottle to get it. No need to spend much on the vodka – just choose one that goes down reasonably smoothly, for minimal interference with the intense Jolly Rancher flavor. I used Svedka, and it was very nice.
12 Jolly ranchers in each flavor you want to infuse (that’s 60 Jolly ranchers all together). The 3.75 pound bag I bought had at least 40 of each flavor, so a couple of pounds of assorted Jolly Ranchers ought to do it.
Five flasks to pour it in. (Amazon

– they hold 8.5 ounces, which is a nice amount.
Optional: a funnel to assist with pouring the vodka into the narrow necks on the flasks.
Optional: something like a plastic sheet or newspaper over your counter, because little bits of Jolly Rancher fall out of the wrappers and stick to everything.

(That’s watermelon, apple and cherry in front, with grape and blue raspberry in the back. As you can see, you don’t necessarily get equal numbers of every flavor in an assortment bag. I got more of the grape than any other flavor, and less of blue raspberry. But even with the blue raspberry, I had more than enough to do the whole experiment twice.)

Step 2: Put Jolly Ranchers in flasks
Jolly Ranchers VodkaPut twelve Jolly Ranchers of each flavor into each flask. Yes, you can put them directly into the flask instead of into a mixing container. The reason? Because you’re not going to have to skim anything out of it, like you do with waxy candies like Skittles. Every bit of the Jolly Ranchers – which are mostly corn syrup, sugar, flavorings and colors – belongs in the final product here. And that’s why this process is so much easier than a lot of candy infusions.

Once you’re done, you should have five flasks with beautiful colored candies in the bottom.

Step 3: Pour the vodka
Next up, you pour the vodka into the flasks over the candies. Stick a funnel (optional) into the neck of each flask, and pour your vodka down it. I filled mine to the top of the neck.
As you can see, they start taking on the color of the vodka immediately, as it begins breaking down the candies. There’s no need to shake them or anything – just let them sit for about eight to twelve hours, and all the candy will dissolve completely with no mess, and nothing stuck to the glass.

Step 4: Chill!
Put your flasks into the freezer and let them chill for a couple of hours. Now they’re really ready for use.
What you have in your flasks now is nearly pure vodka, so they’re very strong on the alcohol. The flavors are exactly what you’d expect: at first, you just taste the Jolly Ranchers in liquid form, exactly like the candies always tasted. Then the vodka kicks in with its characteristic flavorless burn. You can definitely drink these straight up as flavored martinis or shooters, and they’re a lot of fun 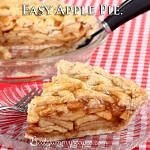