Marshmallow Vodka Tutorial. Based on the success of my Jolly Rancher VodkaTutorial experiment last month, I decided to try something involving a soft candy for a change: marshmallows. There aren’t many marshmallow liqueurs out there, after all, and a successful marshmallow infused vodka would be just that.

Yum. As for the how-to, I thought of a couple of possible methods, based on what I’d learned from the hard candy infusion from last month, the infamous Skittles Vodka Tutorial and vodka gummy bears. I found that both methods worked. Basically, the first just leaves off straining, giving you a more syrupy and sweet infusion. The second method uses some straining and results in a lighter, less sweet concoction. If you found the other candy vodka infusions too sweet, you’ll love the results of the French press method I describe below. 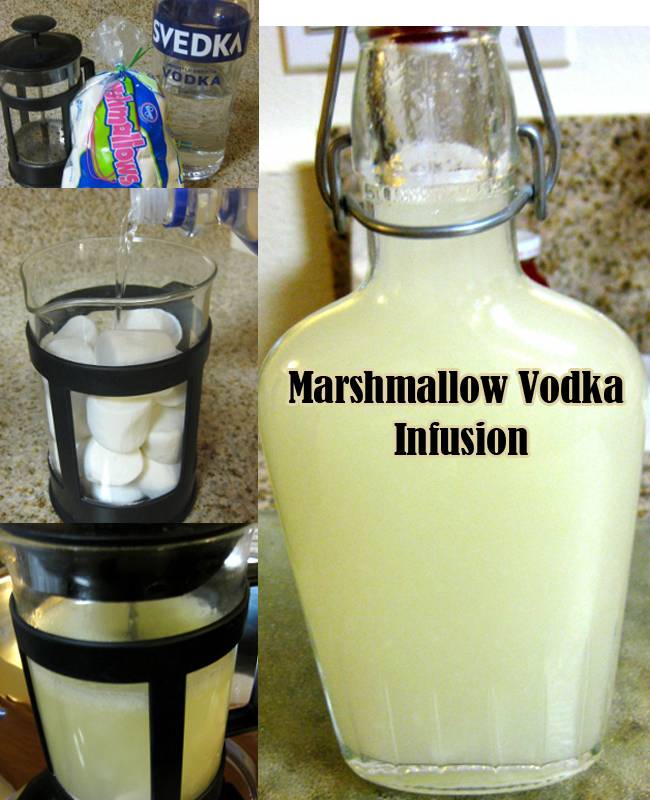 For this “recipe”, there’s no need for exact measurements.

Chop up some marshmallows into small pieces. Even if you’re using little marshmallows, this whole process will happen a lot faster if you chop them to expose the inner gooiness, because the vodka is slow to eat through that slightly tough outer shell. I actually didn’t do this step until later in the process, when I realized how long it was taking. In hindsight, I would still use big marshmallows, because they’d be easy to chop into very small pieces with lots of exposed inner gooiness, whereas the little ones are mostly shell.

Once you’ve done that, put your marshmallow pieces into a lidded container. Fill it up completely with them. Pour vodka in over them – there’ll be plenty of room. Put the lid over them and wait. You can occasionally shake or stir your results to speed up the melting of the marshmallows.

I actually used a French press for this step because I anticipated I might want to strain it. A French press lets you brew coffee right in the hot water, then press down the grounds and trap them, so it works great as a strainer. (I bought an inexpensive French press

online just for stuff like this, and I’ve been very pleased with it – but then I haven’t been brewing coffee with it much.)

I had to leave mine for twenty-four hours, but I suspect if you chop up your marshmallows beforehand, it’ll be a much shorter wait. At some point, the marshmallows will be as thoroughly dissolved as they’re going to get – the vodka can only take in so much. You end up with a floating layer of marshmallow on top (see picture). Now you can use a spoon to push aside the floating layer and get a taste of what’s below it. If you like the taste and texture, you can just skim off the marshmallows that didn’t dissolve, and enjoy your creation. All done!

If you find it a bit thick and sweet at this point, continue to the next step.

If you used a French press, straining is as simple as pressing the top down (I also put my French press in a big bowl, just in case anything leaked, but there wasn’t a drop). The press catches a surprising amount of the visible gunk and takes out some of the dissolved particles of the starches.

This leaves you with a marshmallow layer now firmly stuck on the bottom, under the press, and nothing but liquid with suspended particles above it. At this point, I found it quite tasty, and did not find that further straining improved it any, so I could’ve stopped right there. But

If you didn’t use a French press, or if you still want to strain it more, you just need to, well, strain it some more, anyway you like. My suggestions are:

You’re done! Now it’s time to pour it into your Glass Flask

. The finished result is a very pale yellowish-white opaque concoction:

It’s generally agreed that most things vodka are better chilled, but the flavor of this one at room temperature really surprised me, so you may want to try it both ways and see what you like. Note that if you leave this drink sitting around in its flask or bottle, some white stuff settles to the bottom and the top turns more clear. Just shake it up before serving.

Straight or in cocktails?

This drink is actually very good straight, as a Marshmallow Martini. The marshmallow flavor is there and identifiable as marshmallow, but it’s not overwhelming like the candy infusions. It’s sort of light, and far less sweet than I expected – less sweet than Bailey’s, for example. So you could definitely just drink it straight up, or drop a maraschino cherry in (as pictured at the top) – the cherry falls to the bottom and soaks up the flavored vodka while sitting there making the drink look pretty, and then you finish by eating the cherry. It’s a delicious finish!

Marshmallow vodka can definitely substitute for vanilla vodka in any cocktail recipe, since marshmallow is basically vanilla and sugar, after all. It should also work in most cocktails that call for Bailey’s: while it’s not the same flavor, it’s a similar type of flavor. 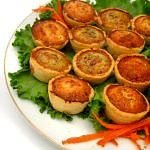 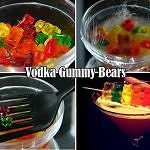