Skittles Vodka Tutorial. Infusing vodka with Skittles is a very popular trend right now. There are a couple of different ways to do it. My way involves separating all the Skittles into their separate flavors and making five different bottles of Skittles vodka.

For this project, you’ll need:

You’ll also want to cover your workspace with newspaper or freezer paper – this infusion can get messy. If you’re making a different sized batch, here’s the formula you need to know: I used 60 Skittles to 6 ounces of vodka, which yields about 8 ounces of infused vodka. If you want to make 1.5 times that, or 3 times that, just multiply your amounts. 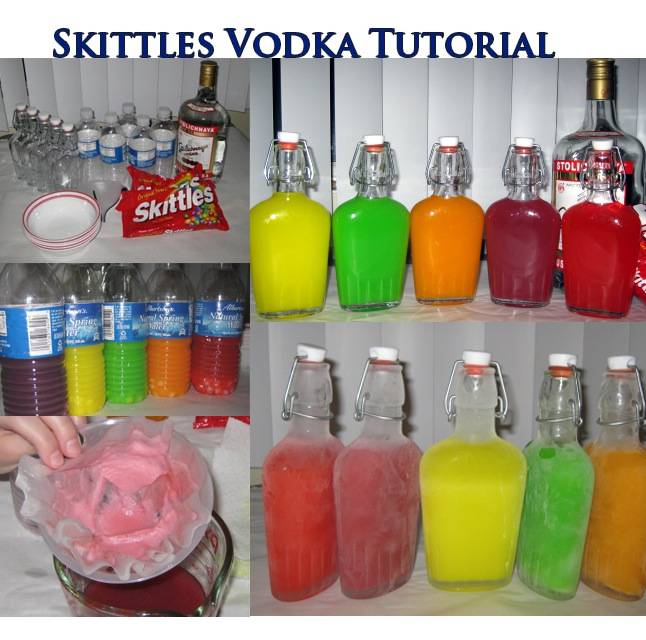 Step 1: Separate Skittles into Flavors
Start by simply separating the Skittles into flavors. You want 60 of each.
Step 2: Setting up your Infusion Bottles
Fill your water bottles with 6 ounces of vodka each. It doesn’t need to be exact – you can always even it out later by pouring in a bit more vodka to the ones that come out with less.
Skittles vodka tutorial
Step 3: Add the Skittles
Pour the Skittles of one flavor into one infusion bottle, then pour the next flavor of Skittles into the next infusion bottle, and so on until all five bottles have a pile of Skittles soaking in the vodka.
You could certainly be more sophisticated than I was here, and use a funnel to pour the Skittles of each flavor into one of the bottles. The reason Skittles vodka tutorialI did it this way was that I felt it would be easier to wash each flavor of Skittles off my hands before moving onto the next one than it than to get that flavor out of the funnel each time – that plastic tends to hold onto the flavors, skin doesn’t.
Step 4: Shake ‘em, shake ‘em, shake ‘em
Now your infusion bottles all have Skittles in the bottom. Give each bottle a good shake – the more, the better. In my picture here, you can see that the colored candy coating has already rubbed off into the vodka, but the white insides of the Skittles still have a lot of dissolving to do. After shaking them, set them aside for a few hours. It’s a good idea to shake them again then, especially if you’re making a bigger batch. My Skittles all dissolved overnight.
Once they’re all dissolved, you’ll notice a lot of white muck floating at the top. We’ll take care of this in Step 6.
Step 5: Strain
There are a number of ways to strain this stuff and get all the white gunk out. Some people prefer paper towels, but I used coffee filters and found they worked just as well. I put a funnel inside a measuring cup.
Then I put four coffee filters in the funnel. It’s hard to say exactly how many you’ll need, since not all coffee filters are exactly the same. I’ll tell you one thing I did learn, though: orange and green needed more filtration than the others. I discovered this when I thought I was finished, and found a little bit of white stuff still floating in those two flavors. No problem, though: I just strained them again through one more coffee filter, and that took care of it. So if you find you haven’t strained it thoroughly enough, the good news is: you can always fix that later.
Then I poured one of the infusions into my strainer setup. I had to pour about a quarter of my infusion in, then wait for some of it to soak through, then pour another quarter in, until I was done. (If the strainer clogs with white gunk, use a spoon to scrape the white gunk out of the way.) In the end, you’ll have about 8 ounces of Skittle infused vodka. Then I dumped the funnel and coffee filters into one of the bowls I’d used earlier for counting out Skittles, to catch drips as I carried it over to the sink. I washed everything out for re-using (except the coffee filters, of course – those I just rinsed before disposing of, so the sugar wouldn’t attract ants).
Then I took the liquid from the measuring cup and poured it into a flask, via the now-clean funnel. You can see here that the green is a little thick, and it shouldn’t have been – that’s why I ended up having to re-filter it. Then I rinsed the funnel out again.
Repeat this process for each flavor.
Step 6: Chill and Serve
Now you’ve got 5 flasks or bottles of Skittles infused vodka:
Stick them in the freezer for several hours – overnight is fabulous…and they’re ready to serve:

Now, these are pretty strong on their own – nearly pure vodka. They are also very sweet. You can drink them straight, served up in a chilled martini glass, or you can use them in a cocktail:

Everyone’s taste varies – there are so many directions you can take this drink in, you really should try anything that sounds good to you! 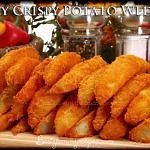 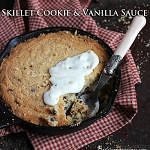