When was the last time you had s’mores around a raging campfire? Yesterday? Sometime during your childhood? Never?

For those of you who did not have a North American childhood, “s’mores” is a contraction of “some more” – it is a challenge to eat just one. S’mores consist of graham crackers, marshmallows, and chocolate. There are two ways of making them:

1. Large marshmallows are toasted on a stick or skewer over a campfire and then placed between two graham crackers with a piece of chocolate (the residual heat will melt the chocolate or at least soften it to make the sandwich.

2. Marshmallows and chocolate are placed in between two graham crackers and wrapped in a piece of aluminum foil (or in a wire basket) which then go close to the fire to heat up the mixture for a melted chocolate-marshmallow result.

Apparently, it was the Girl Scouts in the U.S. who can claim bragging rights to these delectable sandwiches. Tramping and Trailing with the Girl Scouts came out way back in 1927. The first published recipe made it into this fascinating guide-book (the title alone makes it worth seeking, at used book stores or rummage sales…). 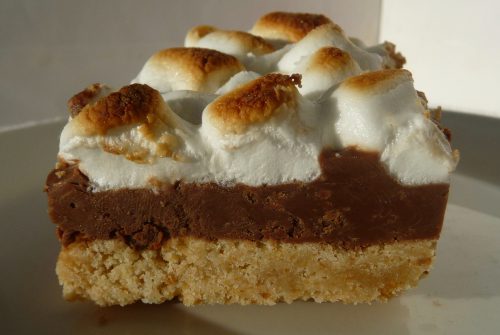 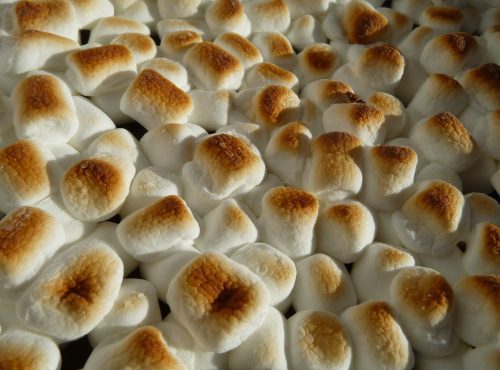 SEE too S’mores Maker with Sticks and Plates

Pre-heat your oven to 375° F and place rack on middle rung. In the bowl of an electric mixer, cream butter and sugar until smooth, about two-three minutes. In a separate bowl combine the flour, salt and graham crackers. On the lowest mixer setting gradually add the dry ingredients to the wet and then mix until well blended. Add up to ¼ teaspoon of water to the sides of the bowl, drop by drop, just until the dough separates from the sides.

Set the oven knob to “broil”. Sprinkle the mini-marshmallows evenly over the melted chocolate, covering it entirely.

Broil the pan, with the top of the marshmallows no closer than five or six inches from the heat for about 30-60 seconds, or until the marshmallows are evenly toasted and browned on top – watch the entire process carefully and do not leave, lest you want burnt rather than toasted marshmallow! Remove from the oven and allow to cool for at least 15 minutes. Cut into bars, approximately 2” by 3″.

Variant: add 1 cup of chopped pecans or walnuts (other nuts could work) on top of the melted chocolate (step three) to make a rocky road bar. 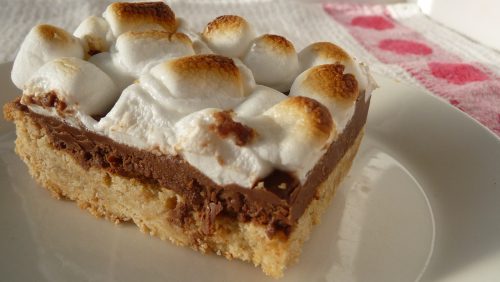