Semifreddo is Italian for half-cold, and the name refers to desserts made from whipped cream mixed in equal amounts with ice cream or frozen custard. In Italy, gelato, a frozen dessert much like ice cream, but with a lower butterfat content, is the dairy ingredient in semifreddo. The desserts can be made at home without using an ice cream maker by chilling homemade custard in the freezer or using commercially prepared ice cream.

When the whipped cream is added to the frozen dessert, air is incorporated as well, which keeps the semifreddo from freezing solid again. The same effect has also traditionally been achieved by mixing in a meringue made from egg whites, but it is not generally advised to eat raw eggs now. The taste and texture of semifreddo has been compared to mousse, and it melts in the mouth quicker than ice cream.

Most dessert makers who create semifreddo with homemade frozen custard start by creating a custard base called creme anglaise in French and zabaglione in Italian. It’s a heated mixture of milk, egg yolks and sugar to which flavorings like almond extract or vanilla can be added. The dessert base is then chilled in an ice bath and mixed with the whipped cream. The dessert is then placed in the freezer until it is cold, firm and ready to be served.

Halve the strawberries and crush with a potato masher to make a chunky purée.

In a large glass or heatproof bowl, add the eggs, yolks, vanilla and sugar. Place over a saucepan filled with 1 inch of water. Using an electric whisk, beat the mixture over the simmering water for 4 minutes. Remove and continue to whisk until thick, frothy and completely cool.

Whip the double cream and fold into the egg mixture along with half of the strawberry purée.

Spoon some of the strawberry mixture into the bottom of the tin and then cover with ¼ of the semifreddo. Cover with more of the purée and repeat until it’s full.

Freeze covered for 4-6 hours until frozen. When ready to serve, cut into thick slices or spoon out with an ice-cream scooper. Serve with little biscotti and extra strawberries. 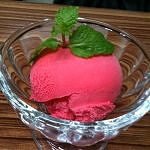 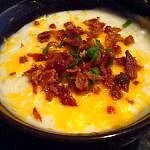