Vodka Gummy Bears. When you soak gummy bears in vodka, they absorb the alcohol and turn into a yummy fruity treat with a kick. The how-to part of this is pretty simple, so I decided to make things a little more interesting. In addition to regular vodka gummy bears, I infused vodka into sugar-free gummy bears, gummy worms (purely to see if they turned out any cooler looking than the bears) and Red Fish (these were disgusting, but in the interest of science I will share my mistakes as well as my triumphs).

For those of you who like really detailed instructions, first up is a tutorial. Those of you who already know how to do it, skip ahead to the “Results” heading.

[Update: there’s been a lot of concern in the news recently about kids doing this to sneak drinking past their parents. Mix That Drink tutorials are strictly intended for people of legal drinking age. Vodka gummy bears are especially tricky because you never know how much vodka you’re actually consuming with each bear. Even adults need to self-monitor their level of buzz to avoid getting more intoxicated than intended with this treat. So please, be careful and responsible!] 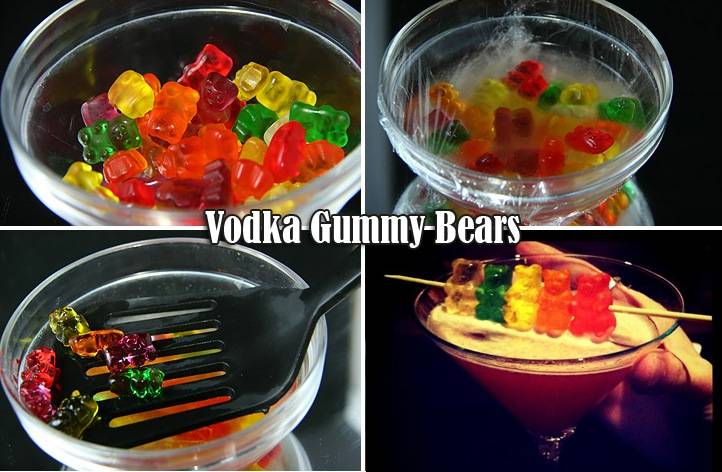 How to make Vodka Gummy Bears

I put the bears/worms/fish into the glass dishes. Then I poured in vodka until it reached the top of the candy. Using that much vodka makes the candy swell and take on a noticeable but not unpleasant “burning” alcohol sensation. If you don’t want the alcohol that strong, use less vodka. (The amount of time you let the bears soak has no impact on how alcoholic they are. They will suck up nearly every drop of vodka you put in, so the trick is to use the right amount for your taste. You can always add more if you taste them after a day or so and think they’re not alcoholic enough.)

Then I put the dishes in the fridge. (The purple stuff is plastic wrap I tucked under the glass lids as extra insurance against the fruity smell leaking out into the whole fridge, but I’m not sure it was necessary.) I left the bears soaking for a total of five days, but after three they had absorbed about all the vodka they could. Give yourself time to leave them in at least a couple of days, if possible. This picture was taken about twelve hours after they started soaking – you can see they’ve absorbed some of the vodka because the level of liquid is lower relative to the bears:

I was told gummy treats would swell up “huge.” The bears did get noticeably bigger, but what really got big was the worms. Here’s a before and after picture (the red bear is sugar free, the green one is regular):

You’ll also find some liquid at the bottom of the dish. This is fruity vodka. It doesn’t look gorgeous or anything (kind of cloudy, may contain a gooey lump or two), so you may not want to serve it at a party, but it’s perfectly drinkable for you.

The regular gummy bears turned out very yummy, but surprisingly, I liked the sugar free gummy bears better. They had a more zingy taste than the ones with sugar, stayed a little firmer, and the alcohol kick was a bit stronger. If you’re watching your carbs, this is a really fun way to feel like you’re not.

The gummy worms also came out a little more exciting than the regular bears, in my opinion, but they were messier. I liked these because they got very big and… well, that’s it, really. Big huge vodka worms. But they were a little more slippery to grasp than the bears, hence a little messier. Which isn’t necessarily a bad thing – depends what kind of party you’re having!

The Red Fish were these gummy-ish, waxy-ish things I found in the candy aisle and thought, why not see if other candies will soak up vodka nicely? The answer, in hindsight: because it’s a waste of vodka. The vodka softened about a 16th of an inch of the outside of the candy into goo, left the interior part hard, and didn’t really penetrate the candy at all. There was still a lot of vodka floating around in that dish. Also, the candies themselves aren’t very tasty. So you really need true gummy stuff for this. I have to admit, the candy-flavored vodka in the dish was pretty tasty.

The alcohol content in each vodka gummy isn’t very predictable, but they definitely sneak up on you – big time. Be forewarned and plan accordingly – designated drivers and so on. 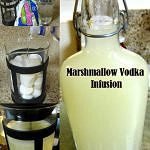 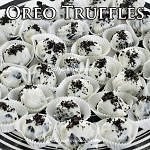