Cinnamon French Toast Bake. One night (very, very late at night), as I was wandering around cyber-space, I came across a recipe for this Cinnamon French Toast Bake. And, just like going to the grocery store on an empty stomach, you shouldn’t wander around cooking blogs on an empty stomach either! I found myself bookmarking LOTS of recipes!
This decadently sweet dish makes a delicious, special breakfast for Christmas morning, New Year’s Day, or a brunch any time of year!

Note: I use a 9×9 pan and only one can of cinnamon rolls and half of all other ingredients . We are a small family of 3 and that as it was just for us.

Directions
Melt butter and pour on ungreased 13×9 inch glass dish. Separate cans of dough into 16 rolls reserving the icing for later use. Cut each roll into 8 pieces and add to buttered baking dish.

Sprinkle with pecans and drizzle 3/4 cup syrup over the top.

Remove the covers from icing and microwave on medium or 50% power for 10 to 15 seconds. (Should be thin enough to drizzle.) Drizzle icing over the top. Sprinkle with powdered sugar. Serve with syrup if desired. Yum! 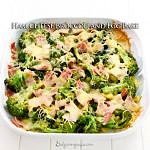 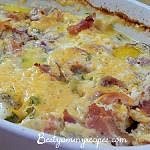